Before I was a dad I was just a mild mannered 20-something year old who had never even heard the words “Diaper Genie”. Then one day, after my daughter was born I realized I had developed superpowers. Now, these weren’t the usual type of powers, I can’t stop bullets, fly, or race around the world in under a minute. These are “Dad Superpowers” a collection of abilities that allow me to even remotely handle this absurd little girl I am tasked withed raising. I am sure other dads have had similar experiences.

So without further ado… 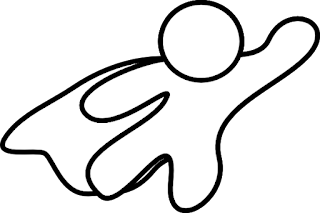 The 5 Superpowers I Gained as a Dad…
5) I Now Have the Power to Tune Out Anything…
When I was a kid my mom would tell me to “tune it out” if something was annoying me that I couldn’t control. I never really was any good at this. I always was distracted easily, and the idea of totally ignoring something was pretty hard. Now that my daughter is obsessed with kids shows, and the same 11 Sesame Street songs I have developed the power to tune out basically anything. This power has become so strong that even if my daughter isn’t in the room anymore, I have been known to let ear and eye piercing shows like Sofia the First play for hours while I sit there with absolutely no idea that the TV is still on.
4) I Have Toddler Spider Sense
Every toddler is generally up to something. They usually don’t even know that they are up to something, but they are. Whether it is the sudden need to tie-dye the dog, or a feral urge to practice their jumping on top of the kitchen table. I used to never really notice when kids were about to engage in one of these crazy acts, but all that changed. I now have a dad-sense that is akin to Spider-man detecting danger. Even if I am in another room, I get a twitch the moment right before my daughter or one of her playmates (the ideas double in both frequency and magnitude when they team up) are about to see how much glue they can fit in their shoes.
Of course sometimes this twitch doesn’t show up in time, and we have to clean Elmer’s out of someone’s sneakers.
3) Bag of Tricks
OK, this is a bit of a cop-out, because it’s not really a Superpower, it’s a lot more like Batman’s utility belt… minus the overwhelming nocturnal mammal vibe. Still, I used to have basically nothing useful with me ever. If I left the house it was with my wallet, keys, phone, and maybe a squished pack of gum. I really can’t think of anything else I would take with me. Now if I have my daughter, I also have my trusty bag of dad stuff. I have everything from band-aids to an etch-a-sketch. I think I will do a whole other post about the absurd contents of the “diaper bag” (hint: It extends way past diapers), but I am prepared for almost any kid created situation that can, and will, occur in the middle of the local Price Chopper. You learn pretty quickly as a parent that it is way easier to over-prepare, and just have the thing you need.
2) Lost Toy Vision
My daughter tends to get obsessed with a certain toy for roughly a week. During that week, she will lose the current obsession somewhere between 17 and 42 times (she gets this from her mother, who loses her cellphone like it’s some sort of competition… seriously honey, you win, you can stop competing now). I was always OK at finding stuff, but it’s been turned up to 11. I can detect a lost toy across a dark room, with nothing but intuition to find it. This is especially useful when my daughter wants the story obsession of the week, and it has been buried under a stuffed animal picnic in her room, or taken to another room entirely (and subsequently buried). If it wasn’t for Lost Toy Vision we might have to go a night without reading “The Littlest Turtle”… heaven forbid.
1) Dad Reflexes
I have never been the quickest of people. However, when it comes to kid (and mess) saving movements I move like The Flash. This tends to work in conjunction with number 4, and it even surprises me when it works. For example, the other day I was walking down an aisle in a restaurant past where a family of four was sitting. The mother and father were on one side, and the mother had their infant on her lap. Dad had taken a moment to order food, and their other child, an adorable little girl saw her opening for a random act of chaos. With no hesitation the girl picked up her juice and was about to drop the whole cup on the floor. I don’t remember acting, but my dad reflexes kicked in as I turned around and grabbed the falling juice while saving a sticky mess.
Before my daughter was born, that juice would have been all over the floor. In fact, I probably wouldn’t have even noticed it happened as I had walked past. But that was then… that was before I got my superpowers.